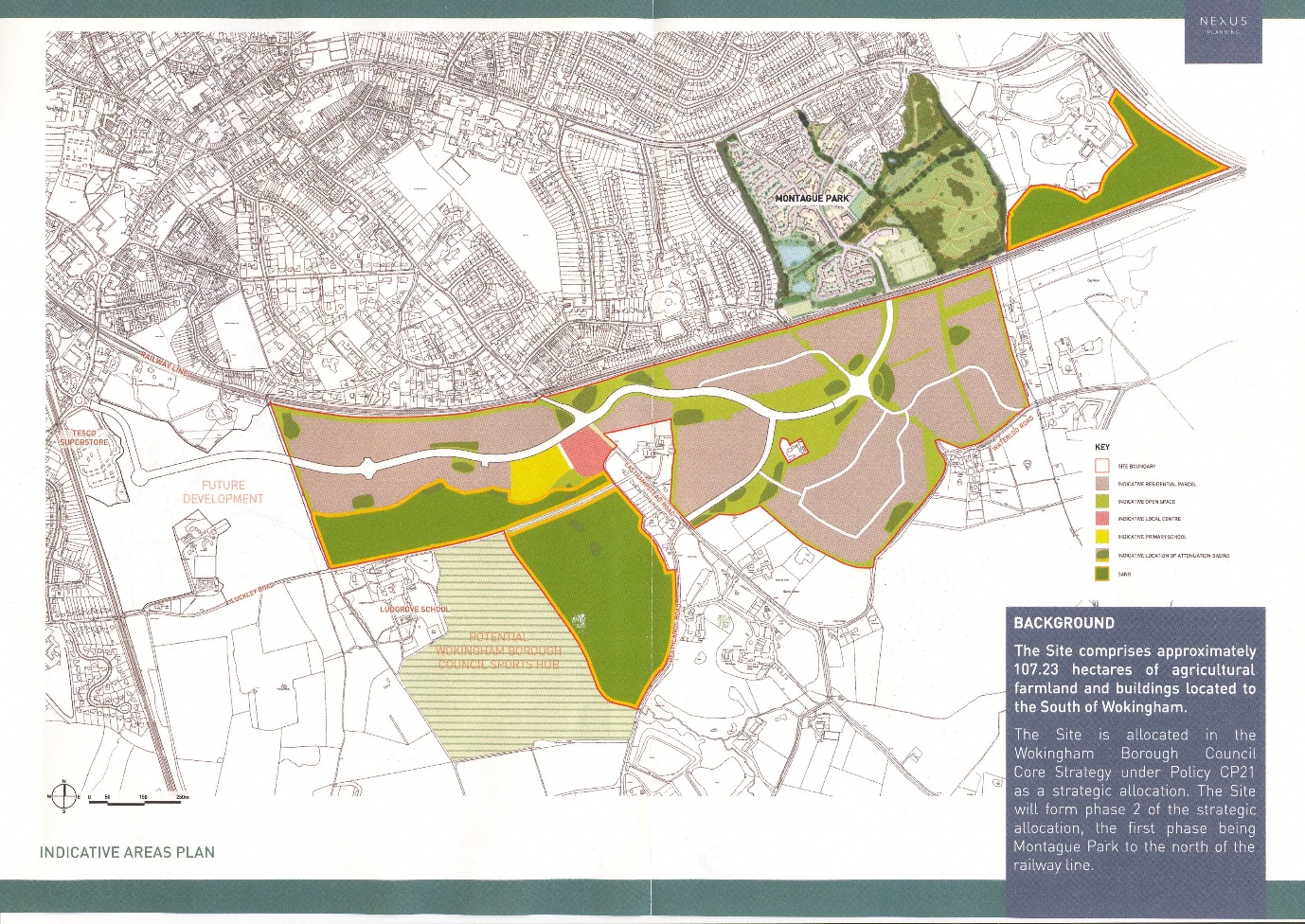 The South Wokingham location will see around 2,500 new homes in total, with some 650 north of the railway and about 1,850 to the south.

The part of the development north of the railway is currently being developed by David Wilson Homes and Barratt Homes as Montague Park. About 580 homes were completed by March 2020 and are being lived in. The first children's play area opened in September 2016. The project is expected to be complete by 2022.

Development South of the Railway

The consortium of developers for the South Wokingham Strategic Development Location south of the Reading-Waterloo railway line held two exhibitions of their plans for that area on Saturday 3 November and Thursday 8 November 2018. The development is intended to include 1600 dwellings, a primary school, a local centre and natural green space. The consortium submitted three composite planning applications in May 2019 and the Society’s Executive Committee submitted a response which can be seen here.

The consortium subsequently provided a revised application in August 2020, saying: “During the application process, we have engaged with the relevant consultees to address any concerns raised. Comments and further information now available, have resulted in changes to the masterplan following the reconfiguration of the location of the primary school and local centre to accommodate the drainage requests. Further, the detailed design of the Holme Park SANG has been refined. As a result of the detailed review of the illustrative layout, the number of dwellings that can be achieved on site has reduced …from 1,495 to 1,434 dwellings”.

The Society’s Executive Committee submitted a response that can be seen here.

The Planning Committee on 18 May 2021 approved the three consortium applications. 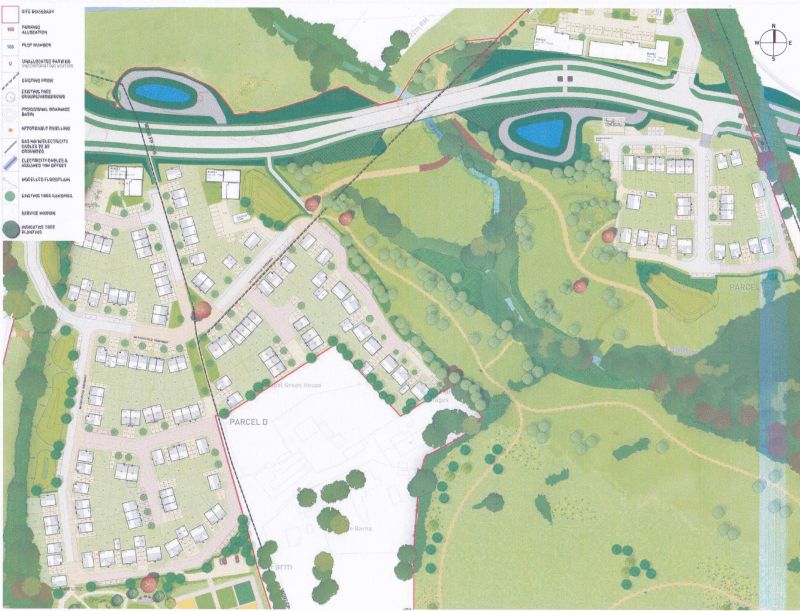 Charles Church Developments has been consulting separately since 2019 about an area in the western part of the Development Location, north of Lucas Hospital. It was initially contemplating about 250 homes but its planning application in March 2020 reduced this number to 190. Revised applications in July and September 2020 lowered this total still further to 171.

The Society’s Committee’s response to the latest applications is shown here. A decision is awaited.

Beaulieu Homes has been pursuing plans to build on land west of St Anne’s Drive, off the London Road. There was no public consultation prior to its application for 8i dwellings in 2018, which was rejected primarily on grounds of over-development. The Company’s appeal against this decision has yet to be heard by the Planning Inspectorate. Meanwhile Beaulieu has submitted a further application for 54 homes on the site, yet to be decided, The Committee’s response, which is similar to that submitted to the Planning Inspectorate, can be seen here.

In the Summer of 2014 Wokingham Borough Council held a consultation about the preferred route of the South Wokingham Distributor Road (SWDR). 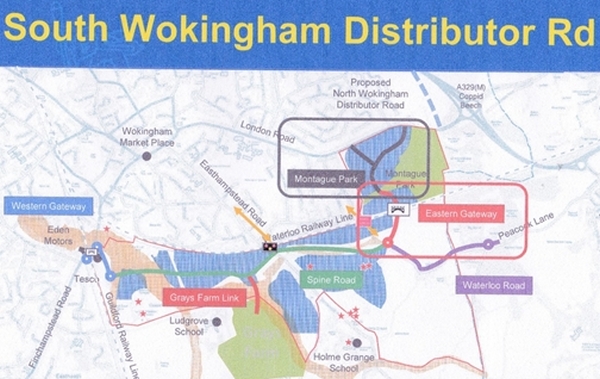 A feasibility study looked at three possible routes for the road (a route to the north close to the Waterloo railway line, a route through the centre of the developments and a route in the south of the development area). This study has identified the central route as the technically deliverable route and also identified a need for improvements to the Peacock Lane link to Jennetts Park. Over 80% of replies, including that from the Society’s Executive Committee, supported this route, but with a variation (called option B1) as the road approaches the Finchampstead Road that had been urged by a number of local residents.

The Council agreed to proceed with the chosen route, subject to analysing the technical feasibility of the B1 option.

In September 2015 the Council announced that it and Network Rail had agreed early delivery of what is being called the Eastern Gateway element of the SWDR. This will secure funding to provide the bridge over the railway from Montague Park and continue the SWDR as far as Waterloo Road. Because that new connection will allow traffic to use alternative routes, the Waterloo Road railway crossing can then be closed as planned.

Detailed arrangements for delivery of the eastern Gateway section were made available for public comment in July 2017, followed by a planning application in the Autumn. Which was approved in February 2018 Completion is expected by 2022.

Design work has been completed for the central (Spine) and Western Gateway/junction with Finchampstead Road/Molly Millars Lane sections of the SWDR. These have been subject to drop-in sessions and subsequent planning applications.

The application for the central section was submitted in February 2020 and subsequently amended in December 2020. The Executive Committee of the Wokingham Society submitted a largely supportive response but asked for future engagement with Borough Council Rights of Way Officers to discuss detailed arrangements for the affected footpaths (see submission here).

A separate application for the Western Gateway between the SWDR junction with the Finchampstead Road and Molly Millars Lane, necessitating the demolition of two houses and providing an offset roundabout, was also submitted in December 2020. It is now proposed not to replace the railway bridge carrying the Reading-Waterloo line, the use of this part of the road by HGVs having considerably reduced and the cost of that work being prohibitive. The Executive Committee’s response, which shared the concern of many submissions about the loss of the signalised crossing to the south of the roundabout, can be seen here.

The Planning Committee on 18 May 2021 approved both applications. In respect of the Western Gateway, a condition was added at the meeting requiring the provision of a signalised crossing south of the roundabout and an informative was included that lines of sight be ensured on the southern arm of the roundabout following the late decision not to include a crossing at that point.