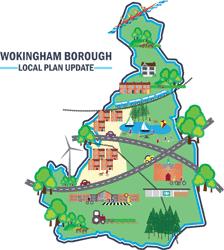 This updated plan will guide development in the Borough for the period 2026-2036, following on from the Council’s Core Strategy and Managing Development Delivery Plan for the years up to 2026. The Update will plan for more housing but also for new employment, schools, roads, parks, shops and community facilities.

One of the key reasons given by the Council for needing the Local Plan Update (LPU) is that the Government has changed the way that local authorities plan for development, particularly for new housing. It is the responsibility of each individual authority to assess how much development is needed in its area and how much should be provided.

It is expected that the LPU will be completed and, if approved after public consultation and submission to a planning inspector, adopted in May 2019.

In Autumn 2016 the Council consulted the public on its general approach to the LPU in a document it called Issues and Options. The Society’s Executive Committee responded to this consultation and its reply can be seen here.
The Council has collated and reviewed all the comments and has issued a further Consultation Document entitled Homes for the Future, in which it asks for views on how development should be managed across the borough and where development go take place. The consultation runs from 12 November 2018 until 12 February 2019. Details can be found online at http://www.wokingham.gov.uk/planning-policy/planning-policy-information/local-plan-update/

As concerns development within Wokingham Town’s boundaries, developers and landowners have put forward a total of 28 hectares of land on 14 sites. The Council will need to evaluate the sustainability of these location s but is seeking views on their suitability within the consultation. Larger sites include Ashridge Farm, Bell Foundry Lane and south of Gypsy Lane; other locations are essentially brown field sites with existing buildings proposed for demolition or conversion.

Among the list of sites in other parts of the Borough is 211 acres of land at Grazeley, for which an application for potential government support for a new garden settlement of 15,000 dwellings has been submitted by the four authorities of Bracknell Forest, Reading Borough, West Berkshire, and Wokingham Borough.

Before he lost his seat in the May 2019 elections, the then Leader of the Borough Council indicated that he and his colleagues had listened to local residents during the consultation period and fully understood their opposition to further large-scale development. He said that the Council would put these concerns strenuously to central Government and would invite residents to express their views. The new Leader of the Council issued a challenge to the Government to reduce the amount of housing that the Borough has to build. If there was no agreement, he pledged to use legal courses. He also indicated that the Council would accelerate the timetable for completing the Local Plan Update so that residents and applicants were not left in uncertainty any longer than necessary.

In the Summer of 2019 the Council asked every resident of the Borough to indicate whether they thought the Government-imposed housing target was too high; 94% said that it was, and the Leader of the Council undertook to take that message to Government. In January 2020 the Council issued its draft Local Plan for 2026-36. By far the largest site identified for new housing was the proposed garden town at Grazeley, with some 15,000 homes. The Society’s Executive Committee submitted a response which can be seen here.

Since then The Council has been told that its bid for funds for the Grazeley development was not successful, the Covid crisis has necessarily affected national housing plans and, most recently, the Government has launched a consultation on planning policy and housing numbers. All these have required the Council to revisit its Local Plan and we wait to see its revised proposals